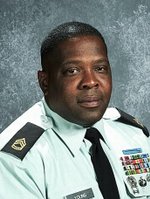 2002 to 2004: Stationed in Fort Knox, Kentucky assigned to 1st Battalion 409th Training Support Regiment as an Observer Controller. I retired in October 2004.

1998-2000: Stationed in Darmstadt, Germany assigned to the 22nd Signal Battalion, working as an Equal Opportunity Advisor for the Battalion.

I was born and raised in Elmore County, in the city of Millbrook.  I graduated from Stanhope Elmore High School in 1980.  I joined the military right after high school.  I have retired from the military after completing 24 years of military service.